Maureen Waititu to finally broke the silence after her name being dragged all over in the recent past.

“The last couple of weeks have been tough of me and I have been silent thinking it is unnecessary for people to hear the other side of the story but now because I have been pushed by the other party to do so, I will have to break my silence. We are supposed to look out for each other and respect each other and that has not been happening and through that a lot of trolls, attacks and trolling and insults on my side. I will address this once and never again.” She started 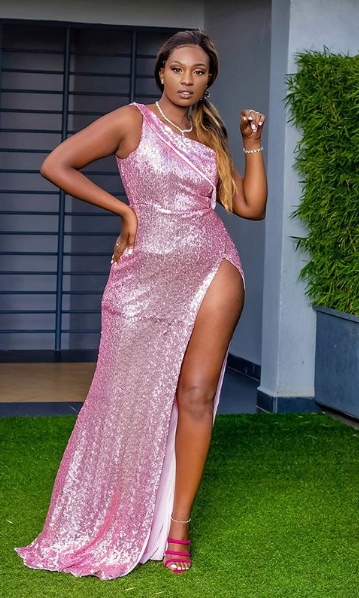 Maureen then went ahead to explain that after an interview she had, her statement was taken out of context and that brought about a lot of backlash.

“I have been living a separate life after parting ways with the father of my kids 13 months ago. Until recently he came to address the issue of being termed a deadbeat and the last couple of weeks have been tough on me. I have never spoken ill of him in the three interviews I have already done. Three weeks ago he made a video on the allegations of being called a deadbeat and he did not mention that it was not to me but to those terming him a deadbeat.

This all started from the interview I did with Kiss100 where I said I am a single mum and that he tries to be a father to his children. But that statement was misunderstood. Because there are things that I felt he would have done more and that is where I am coming from.”

“I have never said anything bad about m ex in public but yes there has been some insinuation. Trolls called me ungrateful because I am living in a house that was given to me by his mum. Truth be told I had told him I found a nice apartment and he said I should move out because this is a rent-free space and I could as well save the money. I have never come out to say this is my house. So when we decided I can stay because it was also best for the kids, I decided to renovate the whole house during the month of May and I did it all by myself.”

She continued by saying the break up has not been easy on her and people should stop pushing her to move on but rather allow her to heal at her pace.

“The break up is a journey and of course, there is anger sometimes because it is not about cutting off. Seeing a thousand plus comments of people abusing me has been so hurtful yet I have done nothing. The worst part is my family being hurt over something they have no control. My mum even cried. People have different journeys of moving on in as much as he moved on faster but people have different journeys. To be honest it has not been easy for me watching all this and no it is not because I am still hang up on him but we have not settled and gotten comfortable with the breakup. It has been painful seeing he has another family. I found out about the baby on boards the same time you guys did. I mean things have been moving too fast for me. To make it worse people are screaming at me and pushing me to move and my name is being dragged left right and center.”

Library to be built in honor of Eliud Kipchoge

Club Covid winner builds a house for her parents

Lovers found dead in Machakos a day after travelling from Nairobi

‘She was my wife’s friend,’ Dan Sonko on his current lover...