Paul Manyasi, the alleged stowaway who fell from a Kenya Airways plane in London in June this year is alive, his father has claimed.

In an interview with KTN NEWS, the father said he last spoke to his son in July 2017 and he also denied that his son’s name is not  Paul Manyasi but Cedric Shivunja Isaac.

“My son is alive, a friend of his told me that he is currently being held at Industrial Area Police Station. I plan to go and see him,” the father said.

He further revealed that he plans to take action against Sky News, whom he accused of lying about the identity of the man who fell from the London plane.

The Kenya Airports Authority (KAA), on Tuesday evening, denied the claims on Sky News that Manyasi was an employee at the Jomo Kenyatta International Airport and disappeared on the same day the stowaway was found on the London bound plane.

“Colnet Limited Kenya is a cleaning company contracted by Kenya Airports Authority. The name Paul Manyasi does not appear in the JKIA register,” KAA said.

The Authority further said that the name Paul Manyasi does not appear in the airport’s Pass Biometric Register. All employees working at the airport require an access pass. 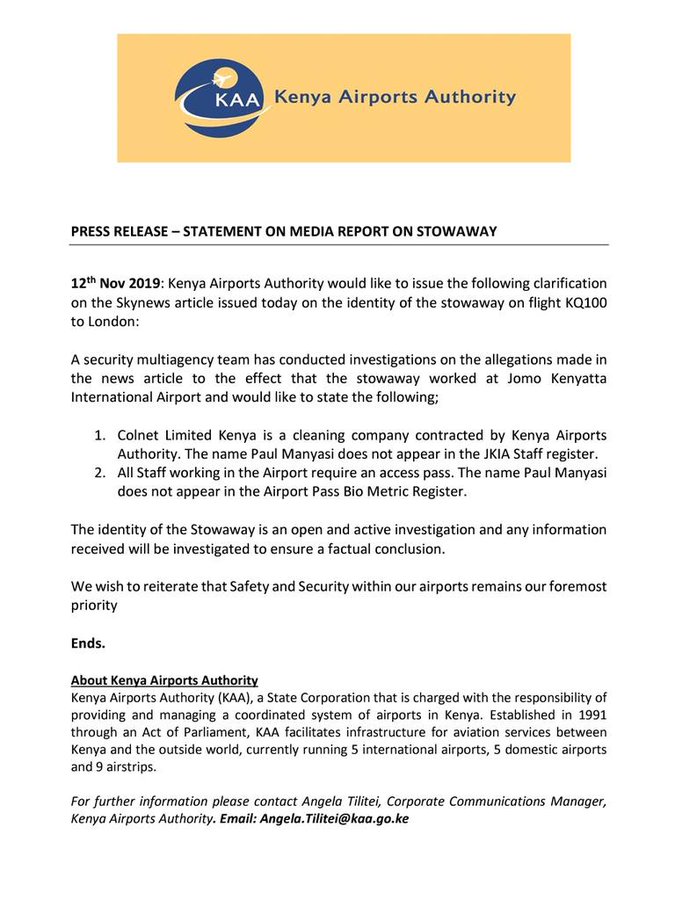 Colnet, the cleaning company that allegedly employed Manyasi, has also denied that a person by the name Paul Manyasi worked for the firm.

‘We can confirm without doubt that we don’t have and have never had Paul Manyasi as an employee,’ reads part of a statement sent to newsrooms.

The firm urged all the persons who gave information to Sky News to avail the same to the police.

Sky News said they had talked to Irene (not her real name) who was allegedly Manyasi’s boyfriend at the time. She said they had been asked to keep the information secret.

Library to be built in honor of Eliud Kipchoge

Hon. Babu Owino, will benefit from one of the heavy-duty mattresses...