In October 21st 2017, a AS350 helicopter registration 5Y-NMJ, that was carrying Nakuru Senator Susan Kihika’s communication team crashed into the lake seven minutes and 38 seconds after take-off. 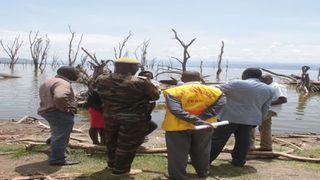 Almost three years later, two bodies are yet to be found.

The pilot and all his four passengers died.

The bodies of Captain Malowa, Ms Veronicah Muthoni and Mr Anthony Kipyegon were retrieved while those of Mr Sam Gitau and Mr John Mapozi were never found.

Muthoni’s body was found still trapped in the seat on November 17, 2017, when Kenya Navy and local divers located the main wreckage on the northern part of the lake.

The first body had been recovered a day after the crash when some parts of the helicopter were found north of the lake near the shore, scattered over a stretch of 100m. 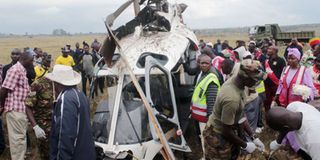 The pilot’s body was found on October 23, four kilometres away from the point where the first body had been  discovered.

According to the investigation, the pilot lost control after the helicopter pitched up, rolled to left and lost altitude.

Investigators blamed “loss of situation awareness by the pilot, who was under the influence of alcohol.”

A  post-mortem examination carried out on the pilot and the passengers did not reveal cause of death.

Toxicological tests conducted on the samples of the pilot’s blood revealed presence of alcohol (ethanol) at a concentration of 41mg per 100ml, which is equivalent to 0.041 per cent of alcohol in the blood.

This was above the alcohol concentration limit set by KCAA of 0.04 per cent.

At the time the chopper crashed, it was to ferry a group of journalists to President Uhuru Kenyatta’s campaign rally in Narok County.

Court detains Major Mugure over murder of his estranged lover and...

Singer Bahati speaks out after being bashed on social media