Mlagui said the strike is premature and in contravention of earlier signed return-to-work deal.

They claim failure by the government to pay salary and promotional arrears within the agreed period.

“A meeting was held with all unionized staffers and all these issues were discussed. There is absolutely no point of calling for a strike,” Mlagui said.

She said the county gave a progress update to the health workers during the meeting and they were satisfied that salaries had been paid within the agreed period.

The workers are protesting failure by the government to remit their third party deductions that include loans, NHIF, NSSF, among others.

Other grievances are delayed salaries, understaffing and delayed promotions that have also affected service delivery in the county.

The deputy governor said that the county labour director Stephen Gona will convene a meeting between the county government and unions on Tuesday.

“So any strike called before then shall be illegal,” she said.

County assembly’s health committee chairman Frank Mmare asked the unions to give more time for the government to effect payments.

He said that funds to pay for the statutory deduction had been included in the supplementary budget that was signed by Governor Granton Samboja on Thursday.

“In this budget, we have increased the allocation for the health department to enhance efficiency through the purchase of pharmaceuticals and equipment. Let us give the government more time,” Mmare said. 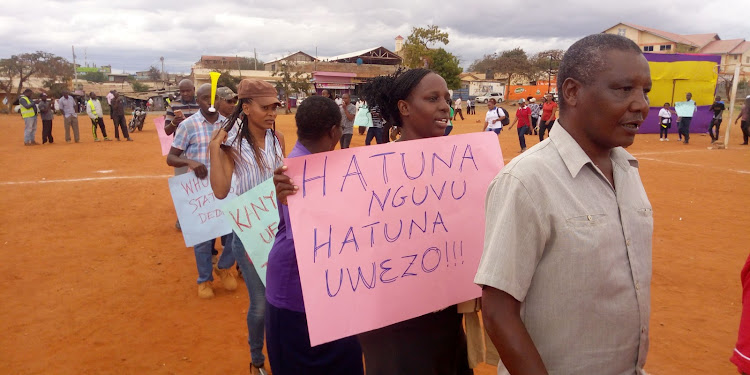 Kalonzo, Karua among 22 others conferred rank of Senior Counsel

Sirisia MP John Waluke sentenced to 10 years in jail or...

Tourists arriving in Kenya will not be quarantined if they don’t...

CS Kagwe says Ministry of Health received only 15 per cent...